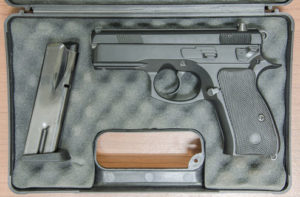 A federal judge recently concluded that a Smith & Wesson firearm was not at fault in a personal injury case in which the firearm accidentally discharged and caused a man to lose a finger. The event occurred when a consumer attempted to make the gun safe inside a store. The victim argued that a loose screw on the built-in laser sight of the firearm prevented the slide from locking in position. The victim dropped the gun while attempting to lock the slide back because the screw obstructed the locking mechanism and the gun discharged when the victim tried to catch the firearm. As a result of this accident, the victim’s finger had to be amputated. The court based its decision on the perspective that the loose screw resulted in the accidental discharge of the firearm. This event highlights just one of many defective product cases that occur each year in the state of Tennessee. It is very important for consumers to understand the applicable law in Tennessee regarding defective guns.

The law in the state of Tennessee regarding defective firearms is much the same as law regarding any other defective products. A victim must meet certain elements to successfully argue a defective firearm claim. There are three types of ways that a defective firearm lawsuit can be brought. These lawsuits include: a firearm that was defectively designed in such a way that an accident was foreseeable; the firearm is defectively manufactured even though it is properly designed; and the firearm is marked with insufficient instructions or warnings that would have eliminated a risk if the consumer had been aware of this quality. The party that is liable for the defect must also have been able to foresee that an accident could be caused due to the defect.

There are many ways in which a firearm can be defective. Some of the most common examples include guns that have a faulty trigger, a defective magazine, delayed discharges, faulty gun safety devices, failure to properly eject shells, faulty bolt action, or an explosive barrel. Consumers who have modified a defective firearm might discover that the modification prevents the individual from collecting compensations due to the defective weapon. Manufacturers cannot be held liable for defects of firearms that are due to weapon modification.

As in other defective product lawsuits, there are many parties that can potentially be held liable for a defective firearm. A manufacturer will often be found liable in the event the firearm is defective. Individuals are also able to join the retailer who sold the gun for liabilities due to the defective product provided that the retailer knew of the guns defective and decided to sell the weapon anyway. As a result, there are many angles that an accident victim might be able to pursue in order to obtain compensation for damages.

If you or a loved one has been injured or harmed as a result of a defective firearm, contact an experienced personal injury like the legal counsel at Calhoun Law, PLC in Tennessee who can help you begin taking actions today to receive compensation for the accident that is deserved.