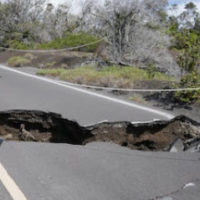 After a massive amount of rain, a sinkhole has opened near a roadway in Tennessee. Approximately half of the width of the road was swallowed in the 30-foot-deep sinkhole. Although crews began working to plug the hole with concrete, additional rain halted their efforts. Ultimately, officials say, the cost for repair will be more than $100,000.

Sinkholes can be unpredictable, opening up quickly with little or no warning. They damage roads, buildings, and vehicles, and occasionally cause injuries or death. Not all sinkholes are the same, though. There are naturally occurring sinkholes and man-made sinkholes.

Natural sinkholes occur as a result of normal processes in which the bedrock dissolves. This causes the ground to collapse or cave in, since there is no solid foundation supporting the weight of the soil. Weather can play a key role, with heavy rains and flooding or extreme fluctuations from drought to floods increasing the risk. These sinkholes can occur suddenly or very gradually, giving people in the area time to secure the safety of their property.

Man-made sinkholes have more obvious causes, though they may still happen without warning to residents. Common causes include water main breaks, removal of natural resources from underground without bracing or replacing their mass, and removing or diverting water.

Sinkholes can do considerable damage to property and person. The bad news is that, unless you can prove that the property owner or responsible party knew of the sinkhole and did not act responsibly to mark it and ensure the safety of others, you will be responsible for your costs. The good news is that Tennessee law requires that providers of homeowners’ insurance include or offer separate coverage for sinkhole damages. Check your policy carefully, though. Some policies cover only naturally occurring sinkhole damages, and often restrict payment to those situations in which foundations are affected. Even if you have coverage, don’t expect your path to compensation to be easy, particularly if you have been injured. You may need to prove, among other things, that:

If your property is damaged or you are injured due to a man-made sinkhole, you will face similar barriers, but may have other options to pursue compensation. Although insurance will sometimes still pick up the bill, proving that the actions of a person or agency caused the damage could allow you to file suit, particularly if you can show that they knew the dangers and proceeded without warning those likely to be impacted. Still, this fault is difficult to prove and will require a significant amount of legal advice.

An experienced personal injury attorney can help you to pursue your sinkhole claim, whether through your own insurance company or in a civil suit. Contact the Nashville attorneys at Calhoun Law PLC today to schedule a consultation.